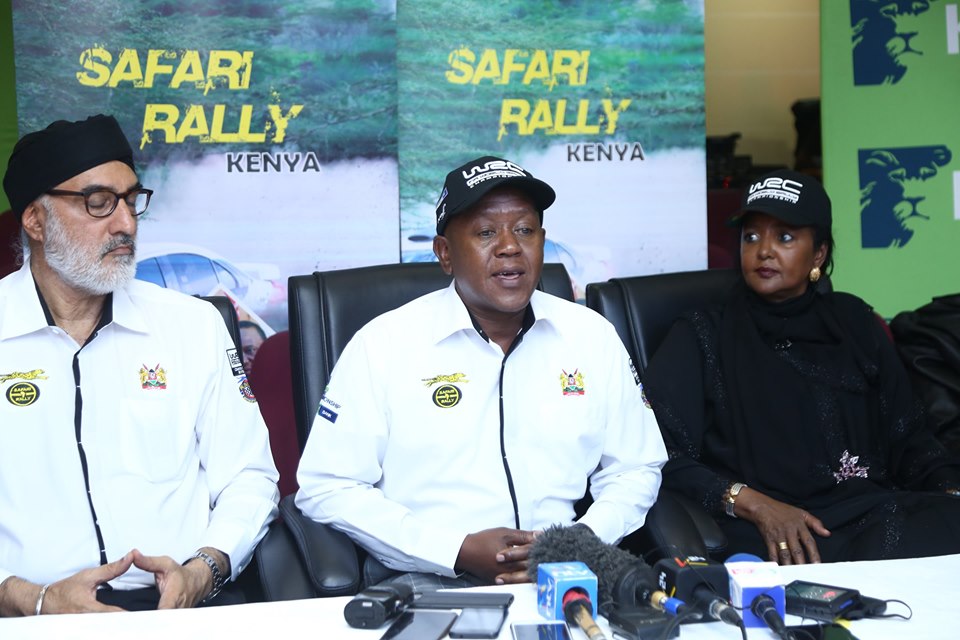 NAIROBI, KENYA, September 27, 2019: The Iconic Kenya Safari Rally is back in the high profile World Rally Championship (WRC) after 18 years, the Federation Internationale Du I ‘Automobile (FIA) President Jean Todt announced today in Geneva, Switzerland.
“I want to thank President Uhuru Kenyatta and that his personal pledge to deliver the Safari Rally back on top of the World Rally Championship has been achieved,” said Todt, a former Safari Rally driver in a live video teleconferencing feed from Geneva.
“I thank President Uhuru Kenyatta for his support and commitment and desire to have the Safari Rally return to the WRC,” he added.
“ I like to remind all the Kenyan citizens that the FIA has a worldwide campaign to reduce the number of crashes on roads. The Safari Rally will be able to work with us on road safety in Kenya and to reduce crashes and increase awareness during the Safari Rally.”
President Uhuru Kenyatta was the first person to congratulate Kenyans for realizing this dream in a recorded televised message from New York, United States at 1:30 Pm.
“Before my Administration assumed office in 2013, I made a promise to the people of Kenya, to return the Safari Rally back to the International Automobile Federation World Rally Championship family. This process has taken us seven years,” said the President in his message beamed on a giant screen at the Kenyatta International Convention Centre.
“It is my pleasure today to announce to the people of Kenya and Africa that this process has been concluded and the Safari Rally has been included in the Federation Internationale Du I’ Automobile World Rally Championship 2020 calendar making the return of the World Rally Championship to Kenya and Africa after 18 years of waiting,” said the President who is also the patron of the multi-purpose vehicle WRC Safari Rally Project which was taked to deliver WRC status two years ago.
“I want to take this opportunity to thank the President of the International Automobile Federation Jean Todt, the World Rally Championship Promoter Oliver Ciesla, the chairman of the Kenya Motor Sport Federation, Mr. Phineas Kimathi and the Directors and Technical teams for working with my Ministry of Sports, Culture and Heritage through the World Rally Championship Project, to deliver this iconic event that forms part of our national heritage.”
‘This is a great moment for Kenya, a great moment for Africa and I want to thank President Uhuru Kenyatta for his support,” said Kimathi.
“We were not picked because we are rich. It is because Kenya is arguably the most beautiful country in the world.
WRC events attract 4.5 million people who visit host nations of the championship. If we get 10 percent of this figure which constitutes new arrivals then this is an event worth investing in,” said Kimathi.
“I would like to pay tribute to those that worked really hard the Safari Rally project succeeded,” said Sports, Culture and Heritage Cabinet Secretary Amina Mohamed.
She said the economic gain and feel good wow effect amongst Kenyans will be paramount in the WRC Safari Rally. She pledged total government’s support and encouraged sponsors to come forward and be associated with the Safari.
KCB Director, Marketing and Communication Angela Mwirigi said as a bank they are extremely proud for being associated with the Safari’s success since 2003. This year the bank gave Ksh50 million sponsorship for the WRC Candidate Event and they will increase the package next year.
Sports Principal Secretary Peter Kaberia said the journey towards the WRC has been long but worth covering. He enumerated the government’s commitment towards the event and assured the world that Kenya will deliver and intends to remain in the WRC for as long as it takes.
“It’s no secret we wanted to further globalise the series by incorporating more events outside Europe and we’ve achieved that next year with this exciting new-look calendar,” said Oliver Ciesla, managing director of WRC Promoter, which owns the championship’s commercial rights.
“The return of Japan and Kenya provide a presence in the world’s largest two continents by size for the first time in more than two decades. The last time Asia and Africa appeared in the WRC together was 1999.
“The two continents are huge markets for the WRC and I thank everyone involved from both countries and the FIA who have been instrumental in returning the rallies to the calendar for 2020.
“New Zealand requires no introduction. It has a long and successful WRC history and the return of its curving billiard-table smooth special stages near Auckland will be one of the year’s highlights,” he added.
The addition of Kenya’s iconic Safari Rally, one of global motorsport’s legendary contests, means the WRC returns to Africa, the world’s second largest continent by size, for the first time since 2002.
It is the first time the WRC has included six continents – Europe, North America, South America, Asia, Africa and Australasia – in its 48-year history. Not since 1999 have Africa and Asia appeared side-by-side in the fixture list.
FIA Rally Director Yves Matton said that in order to further globalise the championship, there was a need to have more WRC rounds outside Europe.
“I am glad to see the results of our expansion strategy, with emblematic events such as Kenya and Japan coming back to the WRC calendar next year, alongside New Zealand replacing Australia, while long-standing, iconic European events provide a great balance and preserve the DNA of the sport,” Matton said.
The full 2020 calendar is:
ROUND RALLY DATE
1. Monte-Carlo 23 – 26 January
2. Sweden 13 – 16 February
3. Mexico 12 – 15 March
4. Chile 16 – 19 April
5. Argentina 30 April – 3 May
6. Portugal 21 – 24 May
7. Italy 4 – 7 June
8. Kenya 16 – 19 July
9. Finland 6 – 9 August
10. New Zealand 3 – 6 September
11. Turkey 24 – 27 September
12. Germany 15 – 18 October
13. Great Britain 29 October – 1 November
14. Japan 19 – 22 November
Caption
Kenya’s Cabinet Secretary in the Ministry of Sports, Culture and Heritage Amina Mohamed (right) together with the WRC Safari Rally Project CEO Phineas Kimathi and the project’s Steering Committee member Jassy Rai at the press briefing during the announcement of the 2020 WRC calendar.